With a team of 10 players, half of which have never played a game of basketball before, all seemed quite nervous and rightly so. They were asked right from the start to play with a smile on their face and with determination to not give up. 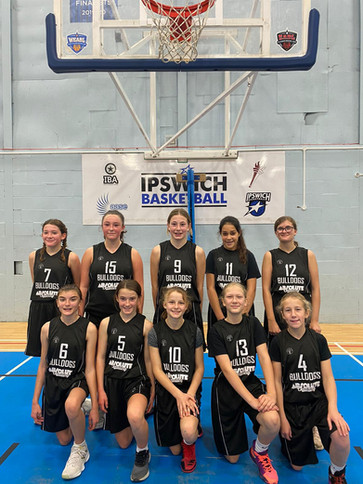 Right from the off they realised how quick the opposition were at attacking the basket. The girls listened to the coaching points from the side and tried their best to put it into practice. The captain Lily Edwards was the first to open to scoring, which gave Bulldogs a little motivation to keep working hard. The first quarter finished 20-6 down, but the girls played much better in the second quarter, doubling their points scored from the first. Tilly Wooldrige ended the third quarter scoring both her free throws. Bulldogs rotated their bench, allowing all the girls to play lots of minutes during their first game. Even though they were up against an older and taller team, the Bulldogs Girls didn’t give up and put another 9 points on the board during the last quarter. Finishing the game with 29 points, against a well established National League side, is something the girls should be very proud of.

Lily Edwards led the scoring with 9 points, including a very nice spin move layup and some solid defending, but close behind Lily was Tilly Wooldridge and Millie Cooper with 8 points. Tilly started as the point guard today with her controlled dribbling and quick crossovers. Millie played very well, strong drives to the basket and won some physical rebounds. Immy Ford contributed with 4 points, her very reliable shooting technique and her confident dribbling helped the team. Grace Edwards was another essential member of the team today, playing some really good defence and setting up at the other end. It was lovely to see Jasmine Stevenson and Soffina Eissa get on the court and play their first game. Both girls are very new to basketball, but attend almost every training session and have improved so much! They also had 3 players from the club’s U12 team playing up; Greta Misinske, Rachel Williamson and Rosie Smythe who all played well, had the confidence to dribble with the ball and made good passing decisions.

Following the game, Coach Jo Brawn said “I can’t feel any more proud of these girls and I feel so privileged to be able to coach this group”.

“The girls couldn’t have given me any more than they did today. They worked really well as a team, they were positive throughout and listened so well. These are the foundations we need, so as to be able to grow together and to improve, not just as individuals, but as a team! I am really looking forward to this season. Watch this space because these girls are going somewhere!”

New players are always welcome with our All Girls group, so if you’d be interested in joining us, please get in touch.