Bury St. Edmunds Bulldogs travelled to Norwich in National League Division 3 East, looking to bounce back from the disappointment in Canterbury, and put in a performance against UEA Panthers.

Returning to the team were Nick Fearon and Eivydas Kriunas, and a debut for Lucas Bosma meant that Bulldogs were fielding a stronger side, despite the continuing absences of Mike Coumas, Tom Guerrero, Ashley MacDonald, Ethan Allen and Gvidas Bytautas. 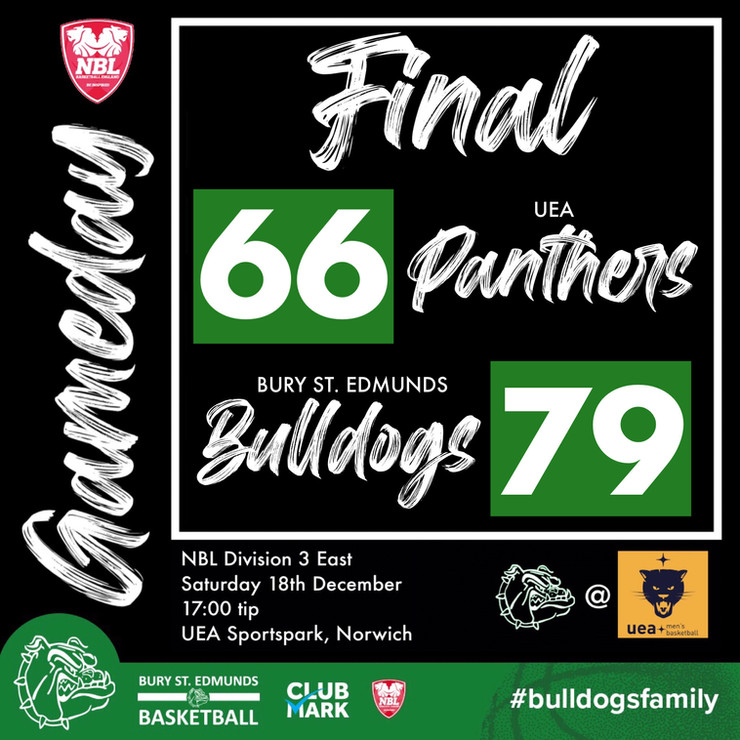 Defensive intensity was key in the first quarter where Bulldogs controlled the boards and moved the ball well to end the first quarter with a fifteen-point lead. The second quarter saw a full rotation of the bench and the margin remained as every player made key contributions. Going into the second half and UEA came back strong twice putting on small runs and with the home crowd increasing in noise there were concerns that it could be a similar situation to Canterbury the previous week.

Bulldogs stayed strong and ensured they made their opponents work for every point with good game management to see out a solid thirteen point win and allow the players to enjoy the Christas break.

Top scorers in the game were Billy Smith with 20, supported by Fearon and Bosma with 14points apiece.

After the game we caught up with Coach Hayley Rigby:
“We worked a lot on game management in the week as well as how we could control the game and make use of our advantages. They showed that as a group they are coming together and playing for one another and it’s great to see.”

Assistant Coach Ashley MacDonald added:
“Being injured on the sidelines has been frustrating but the past two weeks I’ve seen a real change in the dynamic of this group. We are taking on the culture of the Bulldogs family and playing for each other. The basketball we played today was some of the best basketball we’ve played all year and I can’t wait for us to get back on court in the new year.”

The side’s next game is on Saturday 8th January against West Suffolk Wolves at 4:40pm at Culford School – the side’s first home game since the opening day of the season.