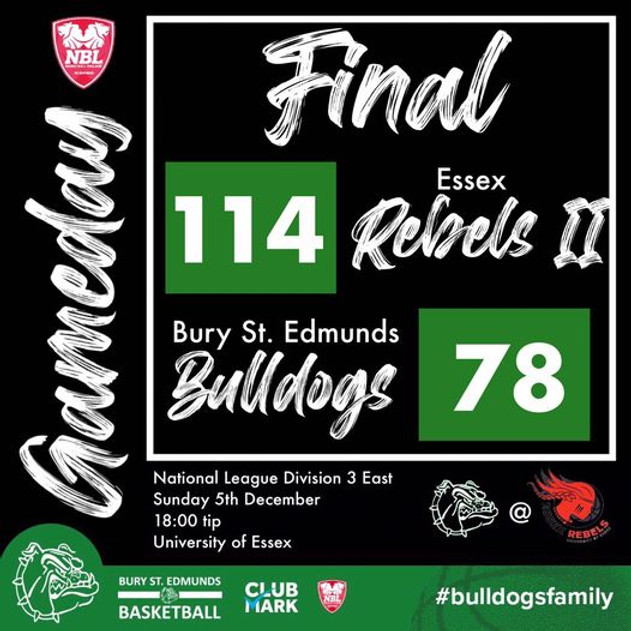 The Bulldogs started brightly, making the most of their size advantage, as first Club Captain (and former Rebel) Billy Smith notched six straight points, before the returning Mike Coumas began to assert his presence in the paint as the game remained close in the early stages, before a late run from the Rebels gave them a 29-20 advantage to end the first.

The second quarter saw the Rebels start quickly and extend their lead, before a run from the Suffolk side, sparked by strong drives to the basket by Ethan Allen and the perimeter shooting of Eivydas Kriunas, cutting the lead at the half to 53-42.

Unfortunately, that was as good as it got for the Bulldogs, who traded baskets in the early stages of the second half before Rebels blew the game open with a strong outside shooting performance, as Bulldogs fell to 1-2 on the season in a 114-78 loss.

“I think that we can understand a little bit of rust on our part in terms of our gameplay – as I can’t imagine too many teams would queue-up for a 50-day gap between games at such an early stage of the season – but with the withdrawal of one team, a COVID case and then a referee shortage, we can only step back and accept that these things are out of anyone’s control, and that we simply have to deal with that situation better.”

“What I can’t accept, and we need to focus on now, is the consistency of our effort and how we work together as a team. The guys are disappointed right now, but they’re making all the right noises, and for me, with a couple of sessions this week and a 3-hour bus journey, I expect them to show me something different in terms of our effort, and just our appreciation for being able to get on the floor and play. I think we all understand that before we can talk about any X’s and O’s, we have to go back to giving our lot.”

“Make no mistake about it, this result stings, but I fully expect us to put the work in this week, and give ourselves the opportunity to bounce right back from it.”

The Bulldogs next travel to Canterbury Crusaders on Saturday 11th December (3pm tip). The side’s next home game is Saturday 8th January at 4:40pm, and is followed by a Fundraising Quiz Night. To book tickets for your team, please contact: nblmen.bulldogsbasketball@hotmail.co.uk