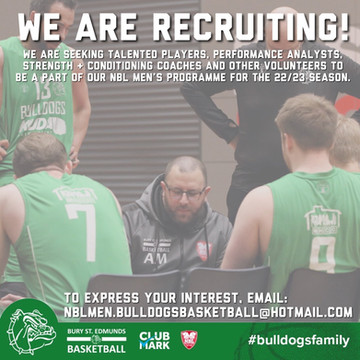 Off the back of a trio of wins to close-out the 2021/22 season, Coach Arron MacDonald is now beginning to plan for the season ahead.

We asked him to reflect on the 2021/22 season and to share with us some of the key deliverables for the side this off-season:

2021/22 Season:
“The league table says we went 6-8 and finished mid-table, which is a huge step forwards from a one-win season. We had another side drop out of the league three days before the season, and in my experience, good teams don’t do that… so it’s fair to say that in a full division, we’d have expected to go .500. You throw in the weird scheduling and six/seven week gaps, and I felt like we only really found ourselves as a team in February.”

“With all of that said, the only game where it really felt like we were out of it was Essex away. In most games, we’ve been in touching distance, but the other team have made a run or two late on. So, in some ways it’s frustrating, as I feel that on paper, we could have been a side involved in the playoffs this year – but we’ve just never had a full team to select from, and have had a lot of players who’ve decided that National League isn’t for them during the season. So, I think that moving forwards, it’s about bringing the right players in to elevate the group we have.”

Sponsors:
As the only side in the division without the backing of a basketball academy or University, the support of local organisations has been key in helping the side to bridge the gap to compete in NBL Division 3.

“We’re really grateful to all of the firms who’ve supported us over these past three years, but we’re now in a space where we need investment in order to take that next step. We’ve moved from being a local league side, to consolidating ourselves as a solid NBL team – but we’re competing with teams whose budget and access to facilities simply dwarf ours – and so, we need the support of our community to take another step forwards.”

“Additionally, we have a number of players who were impacted by one – or both – the 400% rise in non-national registration costs, and the massive increase in fuel costs. So we need more courtside and player sponsors, in order to better support the players who really need our help.”

The Bulldogs will be seeking sponsors for new home and away kits for the 2022/23 and 2023/24 seasons, and to mitigate some of the transport issues, the side are also looking into the possibility of the purchase of a minibus. If you can support the side in any way, please get in touch.

Volunteers:
Whilst the growth of the club over the past few years has been huge, our volunteer numbers shrunk significantly over the COVID pandemic. This is true across the entire club, and volunteers are desperately needed in order to help us provide basketball across all age groups next season.

“We are always looking for excellent volunteers to join our club. I’d implore the parents in our Junior sides to step forwards for qualifications and to support as Team Managers – so that you enable our coaches to focus on coaching your children.”

“Focusing on the National League Men, I think, again, it’s about bridging the gap. Opposing coaches at every club had somebody taking statistics live, and were filming every game. Whilst I managed to get most games filmed, the responsibility for then breaking down that film sat with me – and I’m balancing coaching with a demanding career and a young family. So we’re really looking for somebody to step into a Performance Analyst role with the club. In an ideal world, that person would also be interested in content creation – so as to help promote upcoming games with highlights from prior ones.”

“Strength and conditioning is absolutely another area of focus for us. We’ve had a couple of volunteers approach us, but never quite got to the stage of committing to be a part of the club. We feel that having someone with a keen interest in ‘prehab’ and injury prevention would help us to get our best team on the floor. Given that we’ve never had a full team available since we’ve stepped-up to this level, this is an essential for us.”

“Lastly, we need more game day volunteers – photographers, court managers to help set up and pack away, people to run a club shop… it’s all little things that help us to better show the level we’re now at as a club.”

If you can support us in any way, please get in touch.

Players:
The National League side are looking for more players for the 2022/23 season.

“Like I said above, it’s now about us adding the right people to the core of guys we have. We know that some of our players are stepping away, and for others, this might be their last season. So, we need new players – but those players have to be the right fit for the group, in terms of talent, personality and commitment.”

“We’ve barely had two weeks off and guys are itching to get back in the gym, so we’ll roll the balls out later this month, and we’d love to see some new faces there. So if you’d like to join us, please get in touch, however, please note we’re only looking for experienced players to join us – ideally those with former Senior NBL, Academy/BUCs experience, etc.”

The NBL Side will begin their open runs later this month. New players must book a space to attend. Keep an eye on our social media for more information.