Almost two years since the formation of the Bury St. Edmunds Bulldogs Senior Women’s side, the team made its’ long-awaited debut in the Norfolk league, with a full squad of twelve players – all of whom were making their debut for the club, but many members having never played a competitive game.

Travelling to Notre Dame, the Women’s team also had their first experience that “not all courts are built the same”. Playing on a significantly smaller court, they still got off to a flying start with buckets from Captain Jo Brawn and Alice Schute before Notre Dame scored their first. The Bulldogs ended the quarter up, 32-3. A slight loss of concentration saw the hosts edge the second quarter, before Bury got back into their rhythm in the second half, with Daisy Woodward and Eliza Bartholomew both connecting from three, before the side shared the minutes and scoring load to close out the game with a comfortable 83-27 win. 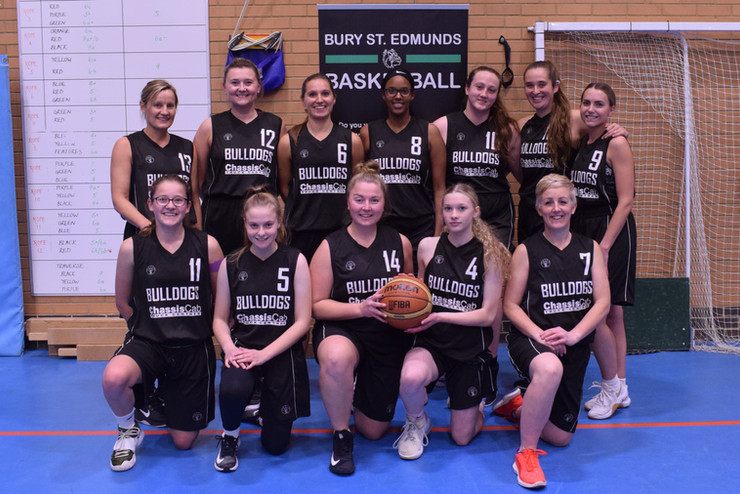 On a high from the result at Notre Dame, the Bulldogs hosted UEA 2 in their first home game of the season. Once again, benefitting from a full squad and welcoming a supportive home crowd; and although the side lost Jess Darnell to injury in the pre-game, the remaining eleven players were left raring to go.

Once again, the Bulldogs were quick out of the block with a great defensive performance helping them to build a 24-5 lead through the first quarter. Learning from the previous game, the side kept their nerve in the second, with Captain Jo Brawn leading the way as Bury ended the half up, 46-13.

The second half saw much of the same, with the defence walling up, steals from Brawn and Daisy Woodward setting up transition scores and big blocks from Alice Schute, as the team cruised through the second half in a true team effort and a spread of points – including Poppy Bixby registering her first points for the club as the Women’s side managed another great win, with a final score of 100-37.

Brawn led all scorers with 36, whilst Schute, Woodward and Deeqa Jama added 12 apiece.

“Both games were a real team effort” said Coach Leanne Lockwood. “We’ve been excellent at the defensive end, and the only thing that’s outshone that was hitting 100 points. We hope to continue our momentum in the next game against Cambridge Cats.”