Bury St. Edmunds Bulldogs made the long trip down to Canterbury in National League Division 3, missing a number of players through injury, COVID protocols and family issues and the recent arrivals of newborn children. Additionally, Hayley Rigby and the injured Ash MacDonald stepped-in to coach the team due to the absence of both Arron and Andrew MacDonald. 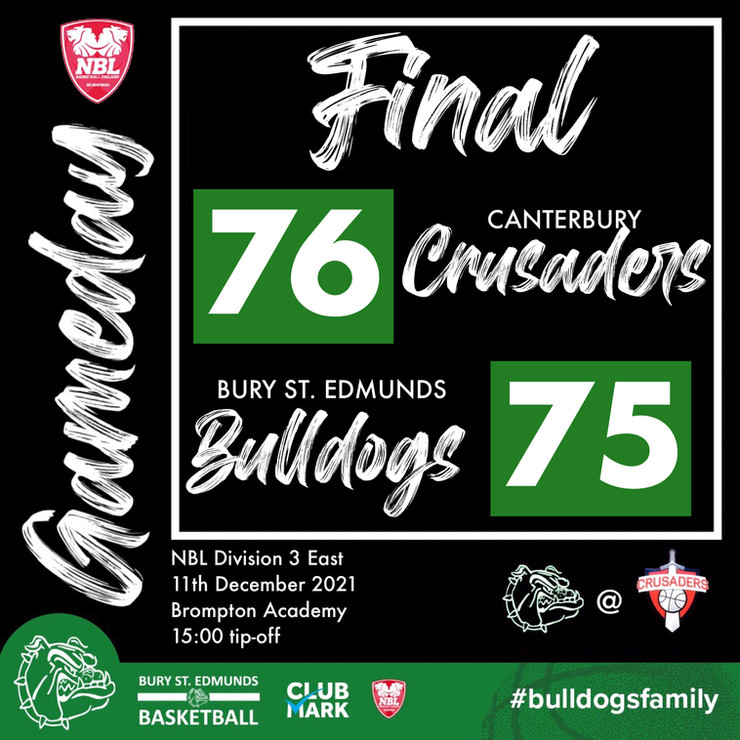 The game started well with both teams trading scores before a Canterbury run gave them the edge, something they maintained going the half.

Bulldogs’ third quarter was some of the best basketball all year with great team play and meant they led going into the 4th. A few tweaks to Canterbury’s defence and with the boost of a home crowd they ground their way back into the game with the scores all level going into the final minute. Unfortunately, a turnover and missed opportunities saw bulldogs fall short by 1pt.

Top scorers for Bulldogs were Billy Smith 19, Sonjay Williams 16 and Jonathan Bourne who added 10 points in his National League debut.

Following the game, Coach Hayley Rigby had this to say:
“Having only come into the coaching role on Friday the guys responded great to instructions.
It was an enjoyable game until the last two minutes, it’s a shame we couldn’t get the win but I think we can take a lot from the result and we’ll go back and work on a few things ready for a tough away game next week.”

Up next Bulldogs look to bounce back with an away game to UEA where they look to avenge the home defeat earlier in the season. Once again the side will be led by Coach Rigby and Asst MacDonald as Head Coach Arron MacDonald continues to recover and isolate from COVID-19.